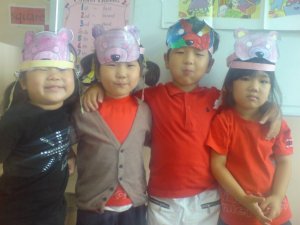 I knew before I left the UK that I would be teaching Korean age 5 to 13 which is English age 4 to 12 (Korean’s have an odd age system, basically when you are born you are one, not zero so everyone is actually a year younger and westerners age a year when they touch ground I am now 26 instead of 25 and will turn 27 in January…. freaky!) I also knew that asian kids are pretty damn adorable and this knowledge was further intensified by the ISIS experience!! When I arrived I went straight to my school to meet my co-teacher Jenny and one of the directors a LOVELY man, who is so utterley charming yet doesn’t speak a word of English! My School is part of the Wonderland branch, and from the outside looks like a multicoloured castle. It is a private institute known as a ‘Hagwon’ in Korea. I don’t really understand the Korean education system and the way schools work but bascially some kids go to just a public elementary school, some just got to a Hagwon (I think) and my kids, the bigger ones anyhow, seem to go to a combination of both! Due to the swine flu paranoia I only saw the outside of the school to start with and didn’t get to see the kids until I had finished my ‘quarantine’. I started the Wednesday after I arrived and turned up feeling slightly bemused and confused as to what and how I was supposed to teach them. One of my fellow foreigner teacher buddies Lisa, was kind enough to lug home with me a selection of books that I could have a read through and two things in particular shocked me. One that these little 5 year olds (who are actually 4) are pretty hot at English and secondly that I would be teaching most of my lessons through the power of Disney! I get the school bus everyday, It picks me up outside the apartment and is small and yellow, we have about 5 buses that all do 3 or 4 journeys each, travelling around the area picking up a bunch of kids. When I board. there are already about 4 of the cutie pies on and we pick up another 7 before we arrive. They are ADORABLE, I was initially shocked by how tiny they were as well, and then I discovered the kids on my bus were all 7, I would be teaching kids 2 years younger than this! Having manage to get off the bus without totally embarrasing myself (its a small bus thats quite high off the ground and we sit at the back! I made my first steps to the school, or attempted to before having to go through what is now the daily hassle of swapping whatever shoes I am wearing to a pair of ugly slippers that fall off my feet every two minutes. Yes the custom in Korea is that when entering certain venues – often schools, restaurants, homes you take your shoes off so as not to bring outside dirt into the building, which essentially is a good idea – however when you put that idea alongside the fact you don’t flush your loo paper, you put it in a bin… for me the concept of hygiene just gets lost. So after swapping my shoes to flimsy slippers and managing to get up the stairs without killing myself (the stairs and shoes are lacking any kind of grip – making the experience similar to ice skating and I am CRAP at ice skating) I was shown my classroom ‘Airport’, and introduced to my new teacher colleagues who are all LOVELY! After having an explore around the classroom to figure out what was where etc, I soon began to meet the students as they all drifted in – it was like being a minor celebrity all of them screaming and getting over excited about a ‘new person’ wanting to touch me and ask me questions, I am so glad they were so small because it could have been terrifying! My first class was adorable, I only have a maximum of 9 in each lesson and this was a class of 8. I also get a Korean speaking classroom assistant who varies between classes from the usual classroom assistants in my younger classes to the Vice director or my co-teacher in others… For the first day I had planned to check the kids knew what they were supposed to do, so there was lots of counting, days of the week, month, animals, food, as well as ‘actions’ like opening doors, running, jumping etc. It was a fun day, i’m sure the vice director thought I was crazy at one point for having all the children running around the classroom pretending to be different animals – but I think she figured out why I was doing and at one point she even joined in! At the end of the day I was exhausted but it was brilliant. We have lessons from 920 through to 7pm but we don’t teach every lesson, we often have atleast 2 lessons off in the middle and sometimes we get to finish at around 4pm. Wednesday i finished at 7pm then I walked back from school (there aint no bus home!) which is a pretty nice 30 minute stroll right past Munsan’s War memorial park ( I need to go in and look properley but at the moment I’m so exhausted I just want to go home!) That first day I did what I’ve done most days since, headed to the Kimbap cafe for food – I heart Kimchi Kimbap – then to the PC Bang to surf the internet for an hour – try and catch up on this blog and the rest of the world then head home watch a bit of a dvd and fall asleep so that I can wake up in time the next morning!