Chuseok Day 2:
So a few weeks ago when Jenny, Shauna and I were contemplating what we should do on our four days off for Chuseok, I mentioned that I really wanted to go to the Zoo. I love Zoo’s, and animals and I had hoped to get to London Zoo this past summer but the price ticket of around 17 pounds put me off, I did manage to get to Chessington world of Adventures which has a Zoo which was brilliant but I still had the urge to go to a proper Zoo. According to my Rough Guide to Korea, guide book Seoul Zoo is one of the Top 10 largest Zoo’s in the world and that it costs less than 10,000 won to get in (that’s around five quid). Seoul Zoo is situated in southern Seoul, so we also got to take our first trip over the Han river! (we saw it from the top of N Seoul tower but that’s as close as we had been!) Its withing Seoul Grand Park which also houses an apparently amazing Contemporary Art museum and one of Seoul’s three amusement parks, Seoul Land. Saying that Seoul Grand Park is Grand is somewhat of an understatement it is HUGE, and we just went to the Zoo part! It cost 8000 won to get in – 4 pounds and that included a train/bus from the ticket booth to the entrance of the park and then a skylift back when we finished! I say we, As well as Jenny, Shauna and I, we also went with David (American teaching in a public school in Munsan) Jesse (Canadian teaching in a different public school in Munsan) and Kyle (Canadian, teaching in a school in Eastern Seoul, friends with Jesse) It was a good bunch of people. We were slightly worried, initially about how the Zoo would be, rumours of cruelty always surround Zoo’s, especially in Asia, however just to put youyr straight right away – Seoul Zoo is as close to Animal Heaven as an a Zoo could be. The animals have masses of space to wander/swing/crawl around in and they all looked pretty happy, (unlike the sad pony). They have a huge collection of animals (No Panda’s) everything from flamingos and giraffes to bears and camels and these amazing little fluff balls in the Nocturnal section (to dark to take pictures) that I wanted to steal – Slow Loris’s and Kinkaju’s – so adorable. Now, the one crazy thing about the Zoo wasn’t in fact the Zoo itself but the Koreans in the Zoo. They feed the animals. They stick their arms and fingers into cages with whatever food they have to hand and they feed the animals, and nobody bats an eyelid. I stood next to a guy in the monkey enclosure who was feeding the monkeys what looked like purple Skittle sweets. A whole family was ripping up grass and plants in order to feed the camels. It was just crazy. We were there for 5 hours and according the map we had we reckon we probably walked atleast 5kilometres. It was amazing. The animals were cute the only not so great bit was taking the skychair back to the main entrance – over a river. Yes I screamed. 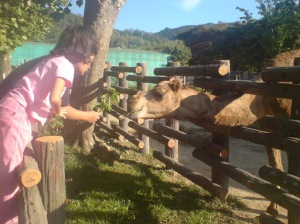 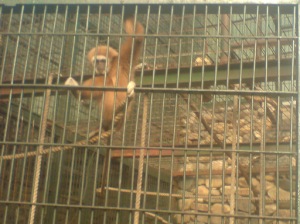 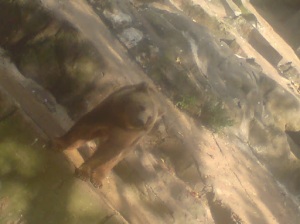 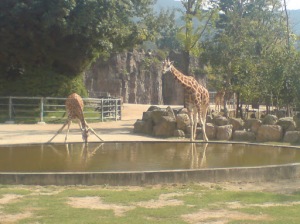