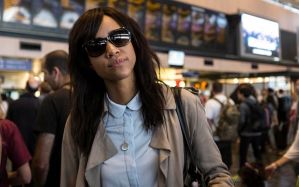 I heart Zawe Ashton big time. Ever since Dreams of a life and then Fresh Meat. She is now in Not safe for work on Channel 4. No idea what day or time as I watch everything on 40d. But who cares about that! Ashton is putting on a brilliant combination of vulnerable and crass and hilarious in her portrayal of Katherine. The jist is Katherine’s life is essentially collapsing and she’s trying to cope. It’s sad. Really sad but funny. Watching Katherine makes your heart tug and mind wince in pain as well as holler with laughter.. The ‘can it get any worse?’ but it does, and it’s all so real in it’s decline. It’s terrifyingly true. It’s not just about her being a victim. Well, I don’t think so although it is only episode two. But it almost is. It’s the way she manages her life. The ever so familiar way… you want to hug her and shake her and go on a night out with her all at the same time.