Walking down the main Mysore-Mangalore highway with my toes and my eyes weeping from blisters is not how I thought I’d be spending my time in the city. Not was eating KFC for breakfast. Somewhere along the way my plans went a little awry, and the scheduled 24 hours in Mysore where I planned to skip jauntily around the palace, up Chamundi hill and maybe pop into an art gallery slowly slipped away after over an hour spent in a rickshaw at 5am. 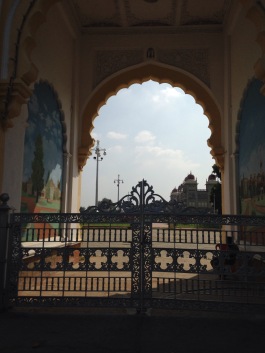 The driver wouldn’t take me to the hostel I wanted. He wanted to take me somewhere better. I said no. He took me to 5 places before I lost it in the street and after him refusing to take me to the first place by which point I’d lost the address of the hostel somewhere in the dawn of the city of Sandalwood so couldn’t get another driver, got him to take me to the second option. Which looked amazing but was unfortunately for me 4km out of the city. Near the mall. And a KFC. By the time I got into a bed it was nearly seven and I was exhausted, hungry, yet to find the KFC, and I had absolutely no idea, really, what the duck I was doing even in Mysore to begin with.

Oh yes, I remember. Fellow travellers. People said ‘Go to Hampi; it’s amazing!’ So I did & it was. They said the same about Mamallapuram, about Pushkar and Gokarna. So I went and ditto. They said the same about Mysore. So I’m here. I’ve met people who have been in Mysore for weeks, months…. I assume the place must have some kind of allure? I was struggling. The hostel was great. But it was twice the price and a 150 rupee around trip into the city, so I thought I’d chill, take stock and decide whether I had the patience to  explore Mysore or just go west in search of coffee plantations and Tibetans. After scanning my guide book, struggling to make any decisions and wishing I’d stayed in Gokarna I turned to Twitter.
It’s thanks to a couple of helpful Indians, clearly a little slow on the uptake, retweeting a Guardian (how ironic) article from 2009 that I found myself walking down the highway in search of The Malgudi Cafe at The Green Hotel, ‘around the corner’ from where I was. I swear, referenced to fellow Chichestrians, it would like walking down the A27 from The Cross to Thursday’s (rip) complete with blisters on your feet from your new Zig Zag heels. It’s just my sandals are now 3 months old.

So I was well as recognising the fact that I need to get a grip and put the beautiful sandals in the bin, as they are the devil incarnate. I also learnt about the legend of Malgudi (via Wikipedia) but first, what did I found on Twitter?

India, as everyone know generally treats its women atrociously. And if you’re an untouchable women well you’re seriously screwed in societies eyes. However at the Malgudi they have tried to change things and in 2009 when they began, there attempt caught the eye of the world as they chose to employ Dalit women, women traditionally and culturally seen as unclean, to cook and serve the food. A small step in the right direction. And a movement I wanted to support because for women’s rights in indua, every tiny thing helps. So there I was trekking down the highway to watch Dalits serve me cake, almost on a par of awkward with funeral watching at Varanasi’s burning ghats and the time a journalism tutor made us do a court report at Southwark crown court. (The box was crammed with family members)

Now the cafe is set at a hotel which is an old palace (many buildings in Mysore were) and whilst it needs a lick of paint and the fabrics and tiles are faded; it’s utterly beautiful. The women looking stunning in their saris, speak impeccable English as if t’was Kate Middleton who taught them herself and having been trained to bake by the French the cakes are better than most ice eaten in London, let alone India. It’s a simple cafe, the faded menu mentions the girls history and the purpose of the cafe ethos, however otherwise it was just a beautiful airy haven which just happened to do that little bit more. As they state. ‘Every delicious bite is a vote for social change’ Considering what happened later, it was in many ways an ironicintroduction to Mysore…