Breakfast is the most important meal of the day, according to nutritionists, it’s something to do with kicking the digestive system into action. In my case, kick it to hard and breakfast ends up on the floor or alternatively i’m starving by 10.15.

I think alot of my breakfast pain comes from my dislike of breakfast staples milk and bread (it’s the yeast) and eggs. That’s not a huge amount left when you remove those three ingredients, or is there? Actually yes. In my three decades I have managed to breakfast by avoiding the three breakfast ingredients many associate as the only breakfast ingredients – i have salmon, avocado, black pudding, sausages, bacon and yes it may make me sound like a carnivorous wanker to forego coco pops and porridge over a platter of salmon and avocado but it’s what works for me.

India is alot easier to breakfast in, although nowhere as easy as Korea, okay yes the bread is switched to rice but I like rice, and my stomach likes rice so all is good! Oh and the bread? No yeast so i’m onto a winning combo! As such, and partly because it’s more often than not been complimentary, for the last months i have been an almost regular attendee of breakfast club, for these three reasons

Idli are white flying saucer shaped patties of squashed rice, and i believe lentils, served with a spicy sambar (see image) which is a thin liquid sauce with chunks of what ever vegetables are in season and cheap -it ranges but those green drumsticks, which can either be soft and edible or completely inedible tend to a regular contribution. You also get chutney – coconut chutney, which is the cement looking substance which you can see on the dosa, or tomato chutney which is the red stuff, it’s essentially tomato salsa. 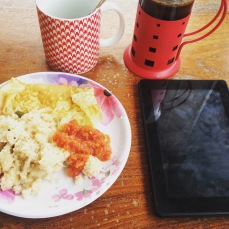 There are different types of dosa and to be honest despite eating ALOT of dosas i’m still never quite sure which I am going to get! The above, rolled soft pancake, is what you get if you order a plain dosa, it’s just this one isn’t plain! This one is part of the food we had delivered to our house, the guy would deliver the dosa and the insides separately because not everyone likes eating masala potatoes at 7am!

A third main breakfast staple, in South India that is, is Upma or Uppuma which is served with sambar, a curry, chutney – whatever liquidness is easy to hand. Despite the description of it being a bit like crushed rice mashed potato, it’s possibly my favourite Indian breakfast. It is in fact made in the same way as porridge but with semolina. It was served by the truckload for breakfast at Amritapuri and it took me months to find out what it was actually called!

The three main breakfasts above are, as previously mentioned what I was served for the first weeks I was in India, by then I had a taste for breakfasts and found myself indulging in them on a more regular basis!

The first stop out of Kochi was Kudle beach, 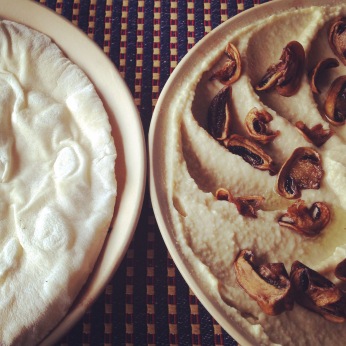 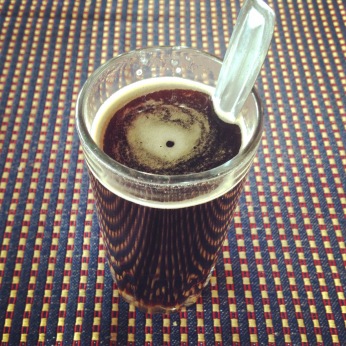 Where my breakfasts took a turn for the slightly more me, consisting mostly of hummus and parottas and black coffee.

And then Mysore where I was with H and we got a bit more exotic with Giant dosas the size of our arms, vadas and heart shaped banana and honey pancakes! 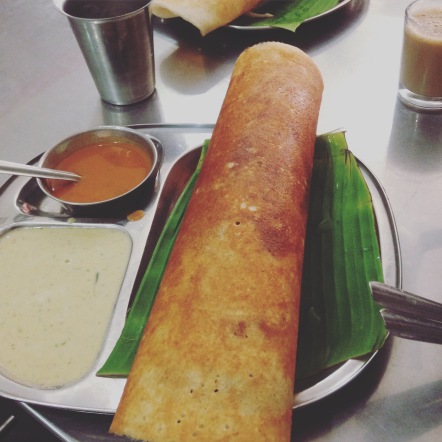 Not quite my pre India breakfast or salmon or avocado or black pudding and sausages but there was one time at the Xandari where I got there earlier enough and ordered sausages… and shed a little tear, they were chicken and possibly the only not so incredible thing about the Xandari!

In Thailand, i drifted back to alot of missed breakfasting in favour of sleep… however on the times i woke up despite the lack of windows or when i wasn’t hungover enough or with monks, then I had the normal breakfast for a brit in Thailand… 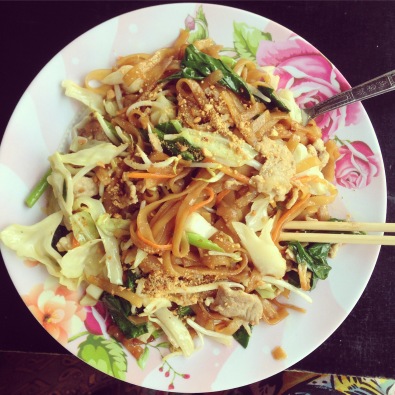 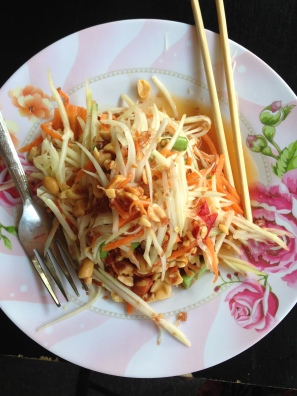 Either Pad Thai or Papaya Salad…

Back in India, via KL Airport and possibly my favourite breakfast of the entire time away,

I went back to a strict diet of Kudle coffee before ending back on the original diet of Idli, Dosas and Upma at Amritapuri.

So with all that breakfasting am I still a paid up member of the Blighty breakfast club? Umm no, so far it’s been Coffee, Green Tea and um, ham… but you never know!